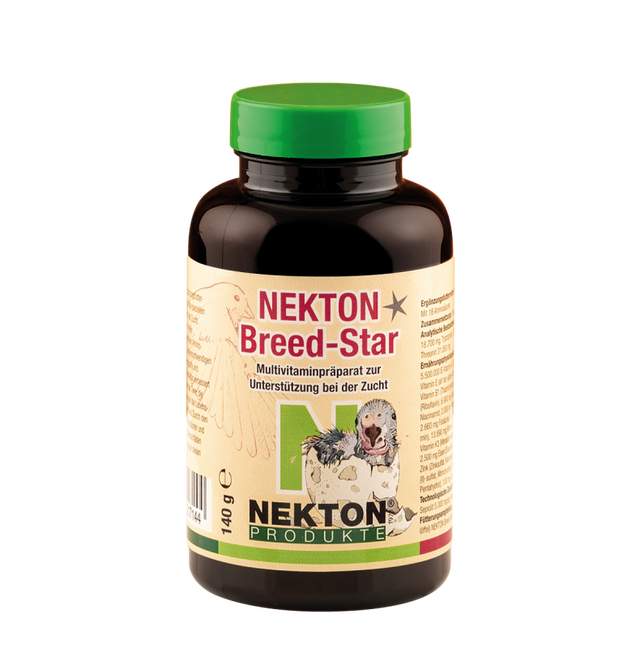 NEKTON Breed-Star is a supplementary feed for birds that was specially developed to support breeding.

In addition, NEKTON Breed-Star has a high content of vitamin E and essential amino acids in a special ratio and is ideal for preparation before and during breeding.

Vitamin E has several functions in animals, but its key function is to protect cells from oxidative damage - it promotes the protection of cell membranes and the detoxification of pollutants produced by cell metabolism.

It is also involved in cell respiration and thus plays a very important role in energy metabolism. In addition, vitamin E supplementation has been shown to improve animal fertility (mainly sperm quality in males and egg fertility in females) and increase embryo survival and hatchling viability.

In addition, vitamin E promotes the formation of antibodies and has a positive effect on the immune status of the organism. Vitamin E deficiency leads to a reduction in fertility, sex drive and the ability to hatch.

Finally, in the case of vitamin E deficiency, the function of the muscles and the heart is particularly impaired.

NEKTON Breed-Star supplements the low content of vitamin E in the feed and covers the animals' needs with this nutrient, which is so important for the body. During breeding, the bird's need for amino acids increases.

NEKTON Breed-Star contains 18 amino acids and a particularly high proportion of arginine, lysine, methionine, threonine and tryptophan, which are of great importance for the bird during breeding.

These amino acids are limited, which means they must be supplied with the feed. The addition of these amino acids primarily increases reproductive performance and also counteracts stress factors. They increase egg quality, including egg weight, significantly improve hatchability and fertility rate, and can stimulate immune response and alleviate immune stress.

The vitamin content of NEKTON Breed-Star is tailored to the special needs of the birds during breeding. NEKTON Breed-Star can prevent damage to the animals' health that can result from a lack of these vital substances. These support the course of the metabolic processes in the bird organism and increase the utilization of all nutrients taken up with the feed. This strengthens the bird's defences and improves performance.

For balanced breeding and to prevent calcium deficiency (egg breakage / egg quality) is ideal in combination with NEKTON-Calcium-Plus.