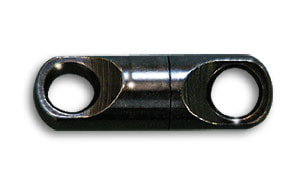 These extra heavy duty swivels originally found favour with Australian crews hunting the giant black marling of the great barrier reef . They have come to be known as ‘Aussie’ swivels, with a reputation as the strongest in the world. We stock them in breaking strains up to 1500 lb (680 kg).

Spike’s tip – Use a stainless steel shekel  to connect the leader for the ultimate Madeira island blue marlin heavy tackle set up.